What the hell is mean absolute deviation?

When I first started looking at the Common Core standards for sixth grade a couple of years ago, admittedly, there was one standard I had to do a double-take on:

6.SP.B.5.C: Giving quantitative measures of center (median and/or mean) and variability (interquartile range and/or mean absolute deviation), as well as describing any overall pattern and any striking deviations from the overall pattern with reference to the context in which the data were gathered.

And, like many of my colleagues, I thought, "What the hell is mean absolute deviation?" My horror was confirmed when I googled it and saw how complicated it would likely be for my students.

I figured that the only way my students are going to have any access to this would be to compare different data sets, make a quick judgement about which one has more variability (which can be very subjective) and find some way of quantifying that variability. On top of that, I wanted my students to create their own data where the goal would be to have the least amount of variability.

I then remembered the "Best Triangle" activity I did with Dan Meyer. In this activity, Dan asked four teachers to draw their best equilateral triangles. (Notice that Andrew and I have points in our nostrils.) 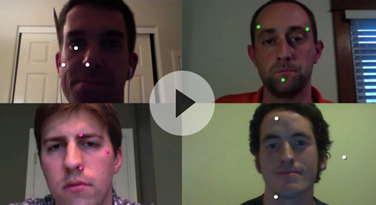 Rather than having the students evaluate the teachers' triangles, I had them create their own. I started the lesson off by asking the students to draw, what was in their mind, the perfect triangle. Immediately, there were several hands that shot up from students who wanted some clarification, but I told them to just do what they thought was best. After a quick walk-around and throwing some random triangles up on the document camera, it seemed that almost everyone was trying to draw an equilateral triangle. A few students argued that a right triangle could be considered a perfect triangle and I admitted that my instructions were very vague and their interpretations were justified.

We then brainstormed all the things we should look for in the perfect equilateral triangle. Students agreed that we needed three equal sides and three equal angles. They then made a second attempt on the whiteboards to draw perfect equilateral triangles. I asked everyone to make a quick judgement about which triangles they thought were the best, but soon ran out of time for the day. After the students left, I quickly took pictures of their triangles and took measurements in millimeters. (Admittedly, this is something I would have preferred having the students do on their own, but my class time is unbelievably short...37 minutes.)

The next day, I told my students that I took those measurements and found a way to rank all of the triangles from all of my classes. Next, I showed them the five triangles which represent the minimum (best), first quartile, second quartile, third quartile, and maximum (worst) of the data (in order below). This was a nice way to show a sample of the triangles as my students had just finished learning about box-and-whisker plots.

When I first showed them these triangles, I asked them to figure out which triangle represented the maximum and the third quartile. The other three triangles were not easily identified, however, we noticed that if you reorient the triangles so that one of the other two sides was on the bottom, the inferior triangles no longer looked equilateral (leaning to the left or right).

I explained that ranking these five different triangles didn't provide too much difficulty, but I was confused how to rank triangles that looked very similar. I gave the three following triangles as an example and had students vote on which one they believed looked the best: 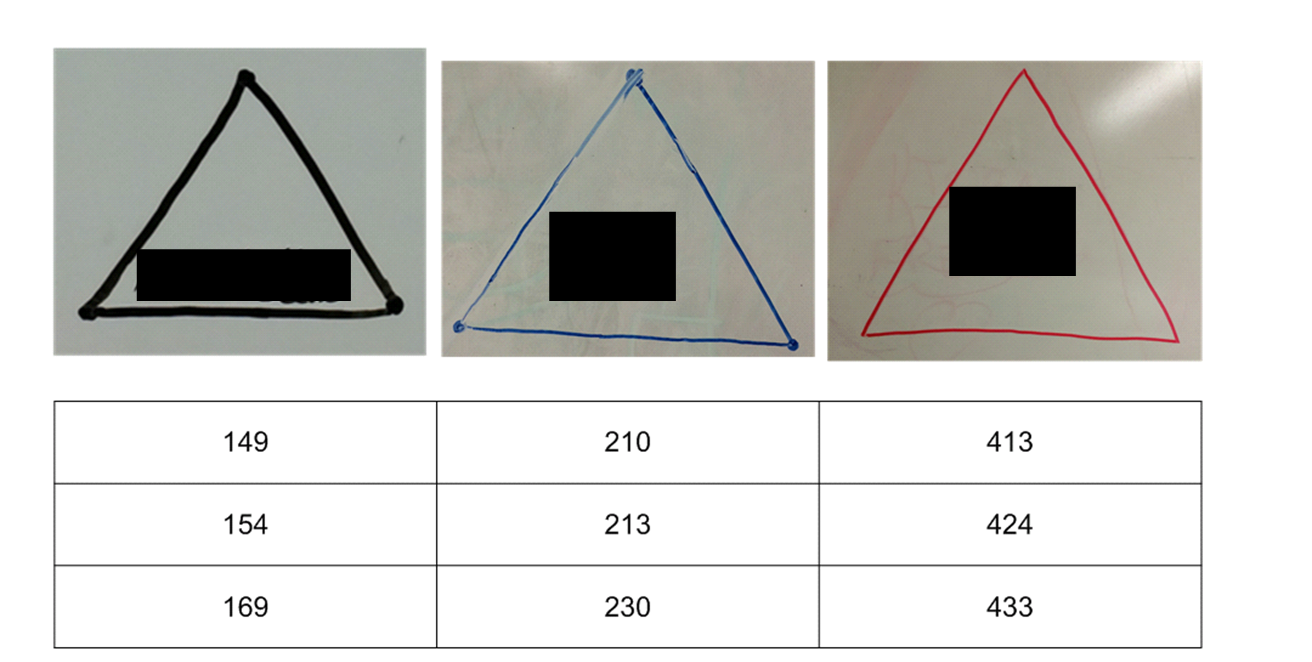 In each class, there was a lot of disagreement about which triangle was the best, and more often than not, the majority picked the wrong one. I then provided the side lengths of each triangle (above in millimeters) and asked the students, "how can we use these measurements to rank these three triangles?"

Next, somebody will ask about the mean of the numbers. I act dumb, as I do with every suggestion, and we explore that possibility. We find the means, and it would seem that we have again hit a dead end.

I have say that at this point, some classes were completely stuck, and some kept going with it. For those that were stuck, I told them that to me, the mean (157 mm for the first triangle) represented the side length that the triangle drawer had intended for each side, but sometimes he or she fell a little short of that goal (149 mm), or overshot it (169 mm). I then asked them to compare each drawn side to "the perfect side length". We found the differences of each length and the mean, and soon after, someone suggested finding the sum of those differences.

At this point, most of my classes were satisfied that we found a method of comparing the triangles. We just had to look at the sum of the differences from the mean. The best triangle was the triangle that had the lowest sum. A couple of classes even went one step further to find the mean of those differences. In reality, there was nothing wrong with either of those methods. However, the second method WAS THE MEAN ABSOLUTE DEVIATION!!! When I first started planning this lesson, never did I think my students would intuitively come up with this concept.

This was the first time I've taught this lesson and I realize that there was a lot more I could have done with it. Given more time, I could have had students work in groups to come up with their own methods for determining the best triangle (similar to Dan's lesson plan) and we could have compared the methods later.

Side note: Dan says that "the best solution is to use the fact that an equilateral triangle is the triangle that encloses the most area for a given perimeter". Sixth graders are not at a point yet where they can find the area of a triangle just given the side lengths, so some other solution was necessary. Technically, my method is flawed because it favors smaller triangles. If you double or triple the size of a triangle, it doubles or triples the mean absolute deviation. This is noticeable in the data as smaller triangles were preferred. A better method would have been to compute the percent differences from the mean, but this would have greatly complicated an idea I was just trying to introduce for the first time.