For some time, I’ve been considering a new approach to teaching mean absolute deviation (MAD). This is a new concept for 6th grade as it is in the Common Core standards (CCSS.MATH.CONTENT.6.SP.B.5.C) The lesson in the student’s textbook is not terribly helpful. It doesn’t give any purpose for finding the MAD for a set of data and the directions for doing so are somewhat intimidating. It is my hope that I can help students intuitively derive MAD on their own, or at the very least, give them the motivation to learn MAD to identify which set of data has more spread.
Last year, I had the same hopes of creating this intuition by having students create equilateral triangles. This idea was borrowed from a similar activity I worked with Dan Meyer on where students had to identify which of four triangles was the most equilateral. I had students create their own triangles and measure the lengths of their sides. We compared the triangles and their measurements to determine which was the best.
It was my hope that students would see the data and have some basic understanding of what to do with it. Unfortunately, I only had one student in my five classes really figure it out without a lot of assistance from me. It was obvious that, if I was going to do this lesson again, I would have to find some way of creating an easier path for my students to find the MAD. To build investment and help find meaning, I would again need data that was student generated, but easier to work with. Thinking about absolute deviations would have to come naturally and the mean of those deviations the obvious answer to comparing data sets.
I created a game for students to play that would require the MAD to determine the winner. Of course, I couldn’t tell the students that this was how the winner was determined. They would have to come up with this method on their own. I called for two volunteers to come up to the front of the class and explained that they would be rolling two dice. Whoever rolled a sum closest to seven would be the winner. One student rolled a five and the other student rolled a ten. I placed their sums on a number line in the front of the room for everyone to see and asked who won and how did we know.

There were a couple of variations in answers, but the general idea was that one was closer to 7 than the other. One student was more specific about how five is two away from seven and ten is three away from seven. Therefore, five is better. I tried to impress upon my students that quantifying how far each number was away from 7 would really help them as we worked through these different scenarios.
I asked the students to roll again, but this time I wanted them to roll twice. The boy rolled a seven and a four. The girl rolled a twelve (already losing) and a ten.

It seemed obvious who won, but I asked students to write down a sentence or two telling me who won and explain how they know. There were a couple of ideas about this, but no one was really thinking about mean absolute deviation at this point. To their credit, it would not make sense to do it here. There are much easier ways to compare these sums. What I did want students to see is that the boy’s two sums deviated from seven by three and zero. The girl’s two sums deviated by three and five. The sum of those deviations was enough to determine the winner.
One girl said that she determined who won by taking the average of the sums. I thought this was a neat idea and it didn’t occur to me to think about it this way. The boy’s average was 5.5 (1.5 away from 7) and the girl’s average was 11 (4 away from 7). This seemed to validate our belief that the boy won. I asked the two students to roll again and again had the students write about which person won. The girl with the averaging method used it again, and again it seemed to work. I then created a hypothetical situation where the girl would roll two seven’s (best case scenario) and the boy would roll a two and a twelve (worst case scenario). I asked, “Who won?”

Before anyone even answered, I could see some students making the connection that the average was not going to work every time. In this case, the sums both averaged out to be seven, indicating a tie, but the boy’s sums were obviously worse than the girl’s.
I explained that the students would now be placed into groups and creating their own data. With one student rolling the dice for me, I showed students how to record their results. I rolled the dice ten times and when finished, I had a line plot that looked like this: 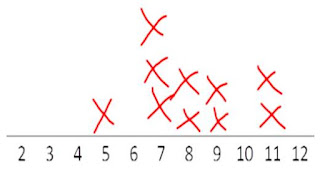 After students finished creating their own line plots, they brought them up to me and I recreated them on Microsoft Excel: 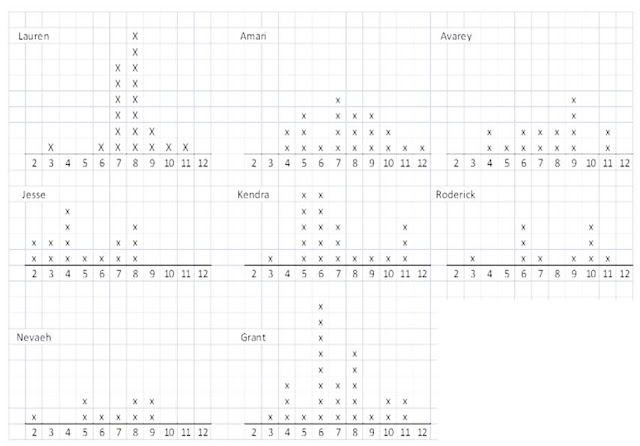 With this data, I asked students to rank the line plots from best to worst. Three groups volunteered their rankings:

We noticed that we were in agreement about ranks 1, 2, 3, 7 and 8, but we had trouble figuring out how the middle groups performed. I placed two of these groups’ line plots on the screen and I asked all students to figure out, mathematically, which one was better.

From here, I got a lot of interesting ideas from the students. One girl tried making box and whisker plots of the data. This made sense because we’ve been using box and whisker plots lately to describe spread by looking at the range and interquartile range. (The following day we had a conversation about how box and whisker plots can be misleading when trying to understand spread.) Another student had an idea to compare the sums from each side. Another girl tried to develop a point system where a sum of 7 would be worth 7 points, 6 and 8 would be worth 6 points, 5 and 9 would be worth 5 points, and so on. The point values were somewhat arbitrary, but she was really developing a good way of quantifying the spread. After sharing this method with the class, another girl suggested using the distances to seven instead, just like we did in the beginning of the class. Rolling a 7 would be worth zero points, rolling a 6 or 8 would be worth 1 point, and so on. I didn’t mention this to the class at the time, but this girl was describing the absolute deviations.
I wrote down all of these deviations with the class and asked, “What’s next?”

Box and whisker plot girl asked if we could add all of these deviations together and compare. So we did. We found that Amari’s total sum of these deviations was 37 and Avarey’s was 28. Most of the students felt that Avarey was clearly the winner. Amari quickly raised his hand to protest, “But I rolled more times than her! That’s not fair!” At this point, many students suggested that either Avarey’s group be forced to roll an equal number of times, or we remove some of Amari’s data. I asked them to consider how we compare different hitters in baseball. If one player gets 78 hits in 100 at bats and another player gets 140 hits in 200 at bats, we don’t force the first player to take 100 more at bats to even things up. After a couple of students made guesses about how to do this, a girl suggested we find the mean of these differences. We quickly divided each value by the number of rolls each group made and found that, on average, Amari was 1.85 away from 7 and Avarey was 1.87 away from 7. We can say that Amari’s rolls were closer to 7 (less spread), but just barely.
We then reviewed how the students ranked each of the line plots and compared this against the mean absolute deviation for each (picture below). It was interesting for students to see how some of their predictions came true and how they were completely wrong for others. Nevaeh’s data is a good example of this – students overwhelmingly thought that her group came in last place, but her score indicated that she was actually in 3rd place. This misplacement had more to do with students thinking less about spread and more about total number of rolls in the 6-8 range. Because Nevaeh didn’t roll as often as the other groups, it was assumed that she lost because she didn’t roll very many 6’s, 7’s, or 8’s. However, she only had one sum that was far from the center.  (There is probably a good lesson here about how the amount of data collected affects comparisons of data sets, but there was no time for me to discuss it.) 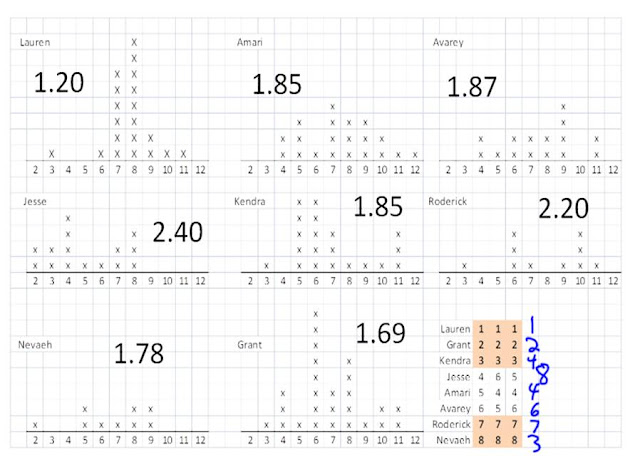 Now that we had some way of comparing the data, I asked students to collect one more data set. Again, they had to roll their dice and write down the sums. The only difference is that they had to find the absolute deviation from 7 for each roll and take the average of those deviations. Students turned their data in to me and I quickly checked that they calculated the mean absolute deviation correctly. Again, we compared line plots and checked those comparisons against the MAD of each data set.
During the next class, we took some quick notes on how to calculate the MAD (this time using the mean of the data set as our central point), constantly referring back to the work we did the previous day. Students practiced by finding the MAD for a made up set of data. Finally, they calculated the MAD for average high temperatures for different cities in the U.S. (This came out of necessity. I explained that the temperatures in Pottsville, PA varied way too much and I needed to move where it’s warm all year round. As they were anxious to see me go, they had quite a few suggestions.)
Overall, I’m pretty happy with how this lesson went. I think it was worth building the context over time and it pushed them to really connect the visual (line plot of the data) with the statistic. When we calculated the MAD for the different cities, students already had an intuition about which cities would have a low MAD and what that number actually means. I feel confident that I will keep this lesson for next year with some minor adjustments.

Special thanks to Bob Lochel and Tom Hall, two math teachers who were nice enough to exchange ideas with me about this through email. Also, I'd also like to thank Stephanie Ziegmont for helping develop some of the writing components of the lesson.
Posted by Mr Kraft at 1:05 PM