Yesterday, I e-mailed my favorite estimation guru, Andrew Stadel, a question about estimating and collecting data. He said I should share my insights with the rest of the world. So, for the dozens of you who read my blog, enjoy!

The other day, I wanted to start easing my sixth graders into estimation (before diving into Andrew's estimation180.com), so I put this up as a warm-up:

For most of my students, this problem caught them off guard. It seemed as if no one has ever asked them to guess the length of something. Some were confused about what I was asking and it was apparent in their answers. I made a line plot for each class and noticed that about 80% of each class thought that side B was 24 inches...as if I was referring to some archaic property of rectangles that says that the longer side of a rectangle is twice the length of the shorter side. Only a few students in each class even got close to the right answer (which I've put at the bottom of this post).

After we talked about some estimation strategies such as using your hand as a guide (see picture below) and identifying lower and upper limits of reasonable answers, many were eager to try another problem. As each of my classes is only 37 minutes in length (crazy, right?), I told them that we could try another one the next day.

So, here's the problem I gave them the next day... 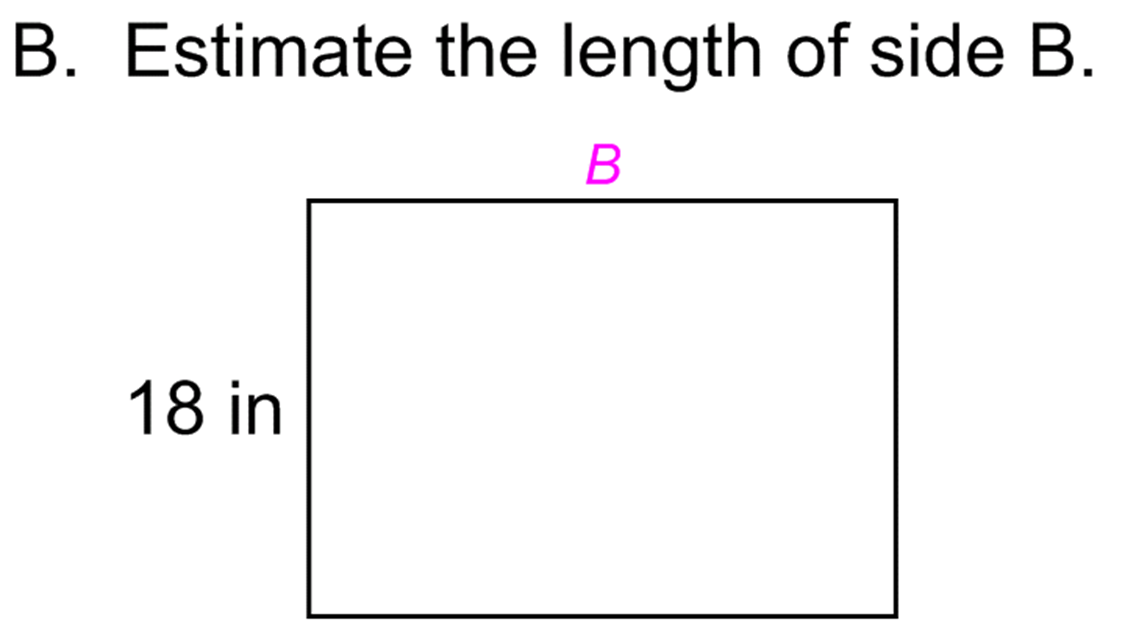 And sure enough, their guesses were much more informed. As with yesterday's estimation, I made line plots for each class's data and we could see that many more students were closer to the right answer. As a class, we felt that progress was made.

Later in the day, I noticed that the data from one class was very similar to a previous class. So I put both data sets up, and all of a sudden, we weren't just evaluating different students' guesses, but two different data sets. Finally, I added a third set, and we started having discussions about which class guessed the best. And the kids were really into it and coming up with some interesting ideas about how to determine the best class. 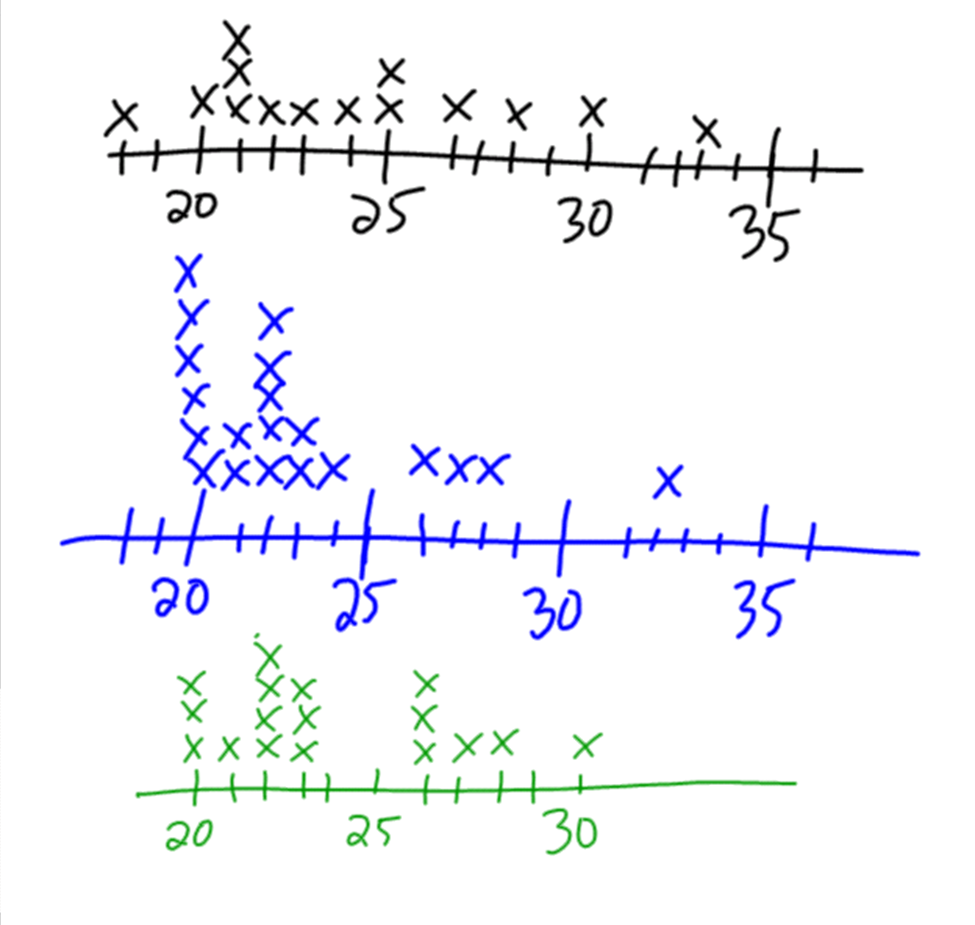 And I thought, this is awesome. Not only are my students driven to become better at estimating, but now they're looking at using math to help figure out if they're getting better at it and if they're better than somebody else. (They're downright vicious when you throw a little competition their way.)

Every Math Teacher in the World Should Do This...Right Now!

Next, we moved on to bigger numbers (48 and 84), and it became much more challenging. Some students just don't know their times tables that well, especially past ten. 3×16 equals 48? Even I'm a bit sketchy on that one.

I showed the students how to write the prime factorization of 48 and 84 using factor trees (which they've already learned), how to identify the common prime factors, and finally, to multiply them to find the greatest common factor. I then immediately sent these students to the whiteboards surrounding my room, so that they could practice finding the GCF for a different set of numbers. As you can see in the picture below, every student has their own space to work.

What happened next? Only the greatest damn thing ever! When students are working on the whiteboards, I can see everything happening at once. It's like I'm looking at the freaking Matrix. With a quick glance, I can see which students got it, which students are making minor mistakes, and which students have no idea what's going on. I can quickly identify errors for students. I can ask a stronger student to help a struggling one. Once a student has the correct answer, I yell, "Great! Erase it! Next problem!"

And the kids love it. As soon as the kids walk into my classroom each day, they ask "are we working on the whiteboards?" As soon as I say, "Go to the boards!", they rush out of their seats potentially harming each other as they make their way there. As soon as I put a problem up, they quickly get to work, Even the students that I know would typically struggle in math class, love the whiteboards and are learning much more because of them.

Now imagine what would happen if these same students were doing this work in their notebooks at their desks. Would they be enthusiastic? No. Would I know how much my students understood about the lesson? No. Would I be able to help students in a timely manner? No. Would they learn as much? Probably not.

I cannot stress enough how much these whiteboards have transformed my students' growth. If you do not have enough whiteboard space on the walls in your classroom, install them as soon as possible. It is the most important thing you could possibly do.

If you'd like more information about this, visit Alex Overwijk's blog post on it (who I give credit for teaching me about Vertical Non-Permanent Surfaces). I believe Peter Liljedahl deserves credit for bring the research on VNPS's to light.

My school recently instituted an end-of-the-day program where almost all of our students partake in different activities. There's a journal day, a current event day, a homework day, a silent reading day, and a real world math day.

And there it is. Real World Math. I see it over and over again. It's almost comical. People love hearing that students are learning real world math (as opposed to all of that other crap that is typically taught in math class). The other day, a colleague was writing some horrible thing called a Student Learning Objective, and he was asking me what he should write. I told him to just throw a couple of buzz words in there like "real world". People eat that stuff up.

Why does all of this bother me? Because when we keep putting real world math on a pedestal, it marginalizes everything else I try to do in the classroom. It says that there are really only a few things worth learning in school, so when something doesn't sound like it's "real world", go ahead and give up. Tune out.

Yesterday, my students and I watched Vi Hart's video about doodling stars.


The kids were entranced by this. I stopped the video to show them what Vi was saying, because, let's be honest, she does talk way too fast. I then showed them how to make one of these stars by picking a random number of points (P) and a random skip number (Q). And they thought it was awesome. At this point, I pointed out that they will probably never use this in life. But that doesn't make it any less relevant. It is beautiful and fun. And if you get any kind of reaction out of it, then it was worth your time. Not everything has to be "real world".

Side note: Throughout the day, I worked on my own star in the back of the room. Pretty damn cool, right? 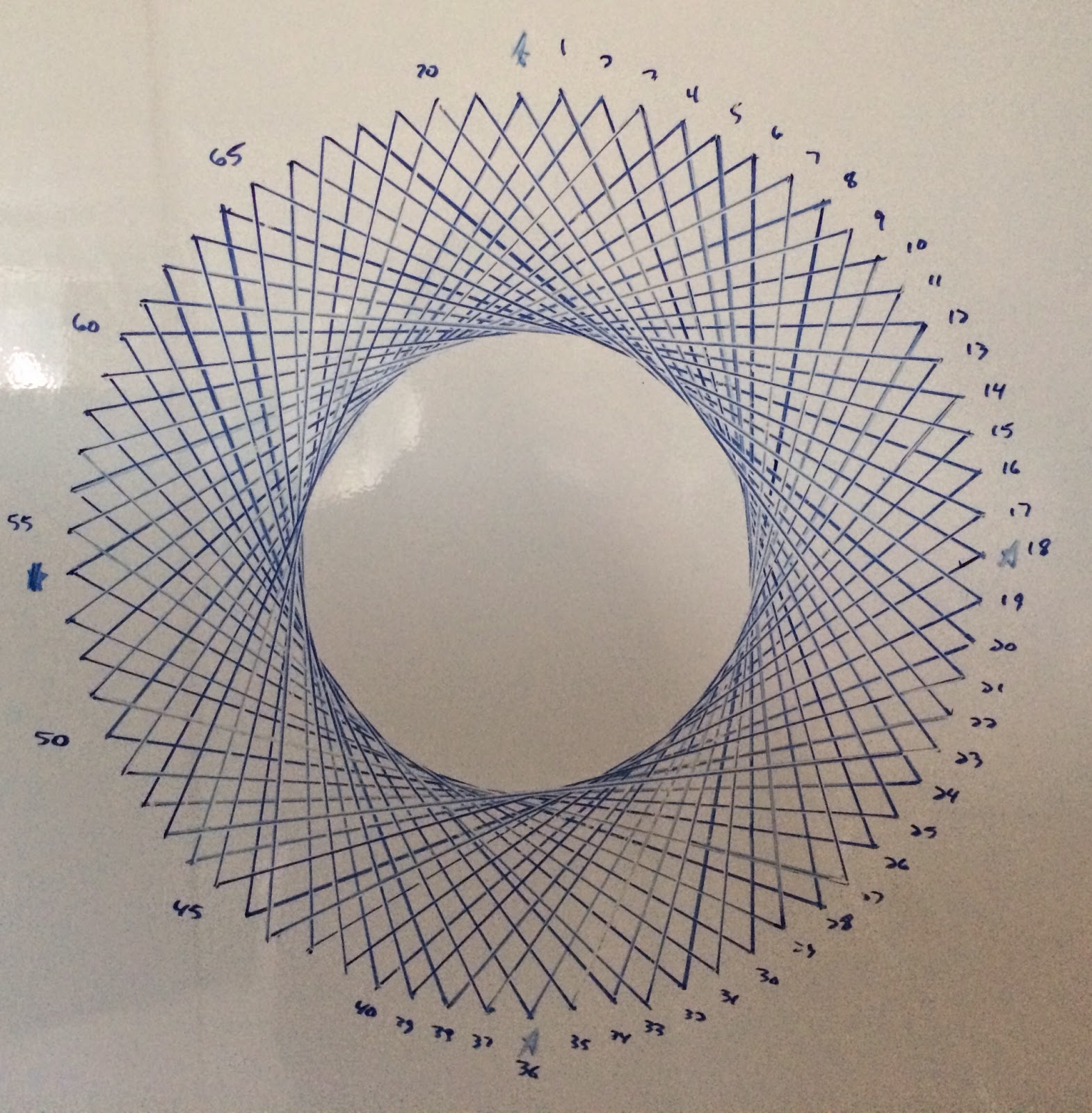