When am I ever going to use this?

As a teacher, I hate this question. For years, I would stumble with the answer, especially when I taught Algebra 1. As a former engineer, I could typically think of ways that I used math, but how does a lawyer, a nurse, or an animal shelter worker use algebra? I have no clue. And like an idiot, I would always try to construct some kind of answer that would never be satisfying to the student.

The real issue with this question is that the student only wants one answer. They want to hear you say, "You know what? You're right. You'll never use this. I've been wasting your time with this nonsense. Maybe I should just teach you how to pay your bills and call it a day."

Students don't want to hear about how every single profession uses box-and-whisker plots. The reason they ask this question in the first place is because they are frustrated. They don't get what you're trying to teach. And they're just looking for an excuse to give up. If the same students were learning FOIL, and could produce a right answer every time, they probably won't complain about never using it (even though they probably never will).

If they don't have to struggle very much to learn something, then they don't need excuses not to learn it.

Neil DeGrasse Tyson is a hero of mine. I even got a print of him to hang in my classroom. You can buy it here. 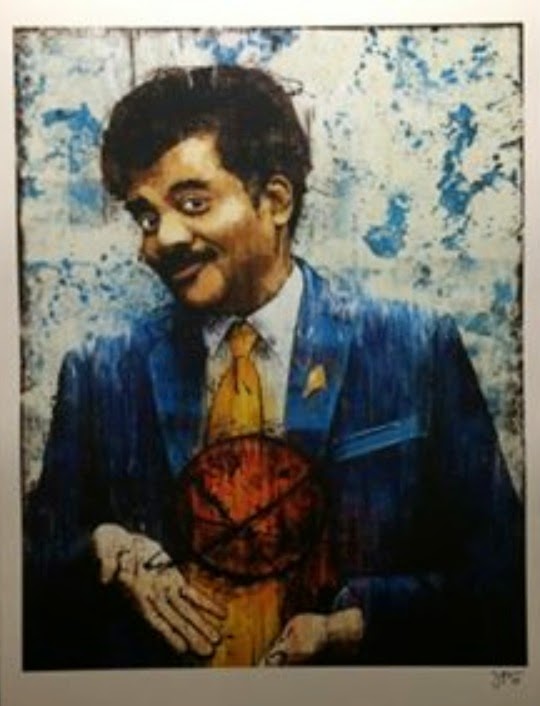 I've heard him talk about how students will often lament about how they will never use some of the things they've learned in school. Here is a panel discussion where he talks about this. In this video, he goes on to say how working on problems in physics (and math) helps rewire the brain and prepares it to solve other problems. And understanding how things work will lay the groundwork for innovation. This is exactly what most business owners want from their employees. They need problem-solvers. They need innovators.

On the first day of school, I talk about this with my students. I explain that the jobs of the future require us to be innovators and inventors. I then show them this newspaper clipping from the local newspaper: 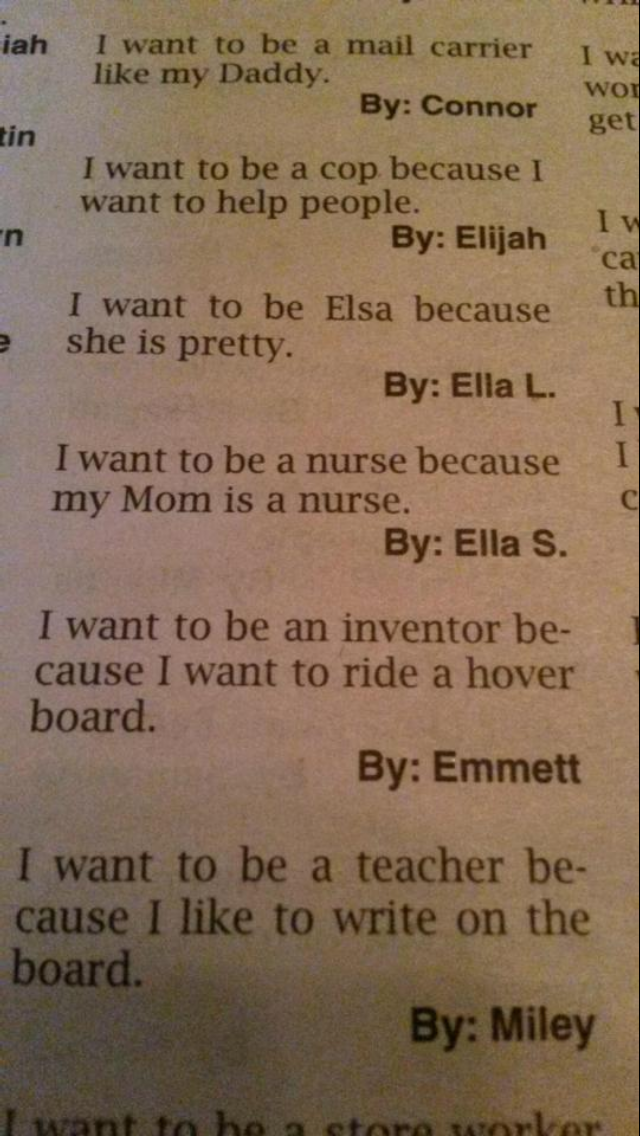 Each year, kindergartners are asked what they'd like to be when they grow up. I read each of these responses with my students. I don't hesitate to tell them that I also want to be Elsa from Frozen. And then I point out Emmett's entry. Emmett wants to be an inventor. I explain to them that I'm really excited about this because Emmett happens to be my son (which would help explain this child's fascination with Back to the Future). I tell them I'm excited because, even at an early age, Emmett wants to learn about math and science. The motivation is there. He is already inventing things and experimenting with electronics sets.

There is only one problem with Emmett. This summer, we went to Disney World and one of his favorite attractions was the Jedi Training Academy. Basically, they give you a light saber, throw a brown robe on you, and after some light saber "training", you face off against Darth Vader. When it was Emmett's turn to fight Darth Vader, he seemed very reluctant to fight. I wasn't sure what was wrong, but after it was over, he explained that he didn't want to fight Darth Vader. He always sympathizes with the villains in movies. He wants to join the Dark Side. What's troubling is, I fear that some day he will take his love of invention, and use it for evil. 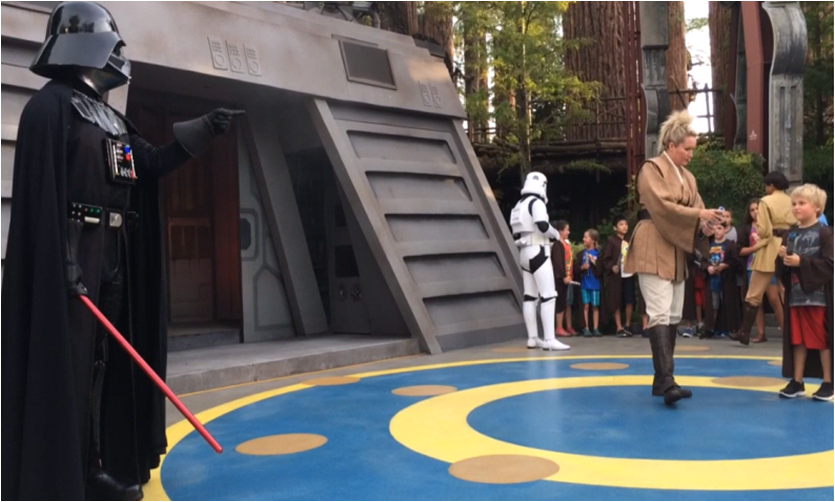 So, while I would like all of my students to be intrinsically motivated to learn about math and science, I am really worried that Emmett may someday destroy the Earth. We need smart people to stop him. And that's my new rationale for why students need to learn everything in math class.

I'm rehearsing for a play called August: Osage County, and in it, my character abruptly stands up and announces, "I have a truth to tell!"

I also have a truth to tell. I never used Fawn's Visual Patterns website. I've known its existence, but I try not to do too many new things each year because I have a hard time following through on everything. I have been using Andrew's estimation180.com, which will probably infuriate Fawn even more. Sorry, Fawn.

Fawn wrote about her opening day activities, and one thing she included was this visual pattern:

After reading her post, I decided that this is the year I'm going to give her website a shot. On the second day of classes, I asked students to draw the fifth diagram. Aside from having difficulties with drawing cubes, most of the diagrams were fine. I then explained that we would be looking at more patterns throughout the year, and they would develop a better understanding of algebra because of this. I explained that one of the things I would like them to learn is how to figure out how many blocks would be in any diagram, such as the 43rd. As soon as I said that, about six kids started frantically scribbling in their notebooks. My first thought was, "Crap! I was going to do something else now and I've just distracted you with a math problem!" And then I thought, "Hey, they're distracted by a math problem. Let's go with that." So, as I would normally do in this situation, I let them try it. And sure enough, quite a few of them figured out the correct number of blocks in the 43rd diagram. There were even some great variations on the process that we were able to share (none of which I've captured here...sorry).

This was the first activity of the year that challenged my students. I'm pretty sure that Visual Patterns (along with estimation180!) will continue to be a part of my classroom routine.
Posted by Mr Kraft at 6:43 AM

This summer, at Twitter Math Camp (TMC), I met Alex Overwijk, the World Freehand Circle Drawing Champion. Check out his video on youtube. It's amazing.

Alex is a great guy, and while this circle thing is a pretty cool gig for him, he knows a lot about good teaching. He (and another great friend, Mary Bourassa) did a great presentation at TMC on spiraling curriculum. He also gave a presentation on Vertical Non-Permanent Surfaces (which is just a fancy way of saying chalk- and dry-erase boards). The research comes from Peter Liljedahl, and Alex does a great job summing it up in his blog post.

It was clear to me that I needed more dry-erase boards. Big ones. All over my room. Wherever I could put 'em. So I made a trip to Lowe's, got a bunch of white panel boards cut up, and fastened them to my windows and to one of my bulletin boards.

With so much white board space, I can have every student working on the boards at the same time. With a quick glance, I can see what every student is doing. I can find mistakes faster. I can see who needs the most help. If a particular student has some great way of organizing his work, I can take fifteen seconds to point this out to all of the other students. We can share more easily and compare different solutions.

Compare this to how I typically had students working over the past eight years. They sat at their desks, working in their notebooks. I would walk around, constantly trying to check work one student at a time, struggling to see what they scribbled on their paper. It might take five minutes for me to make my way around the entire room, only to find one student has nothing on his paper because he spent this entire time trying to fix a mechanical pencil.

After just one week, I am convinced that installing these boards was the right move. I can't wait to see how this affects my students' learning this school year.

Side note: I mentioned Alex to my students and tried to demonstrate how he drew his circles. Here's my first attempt: 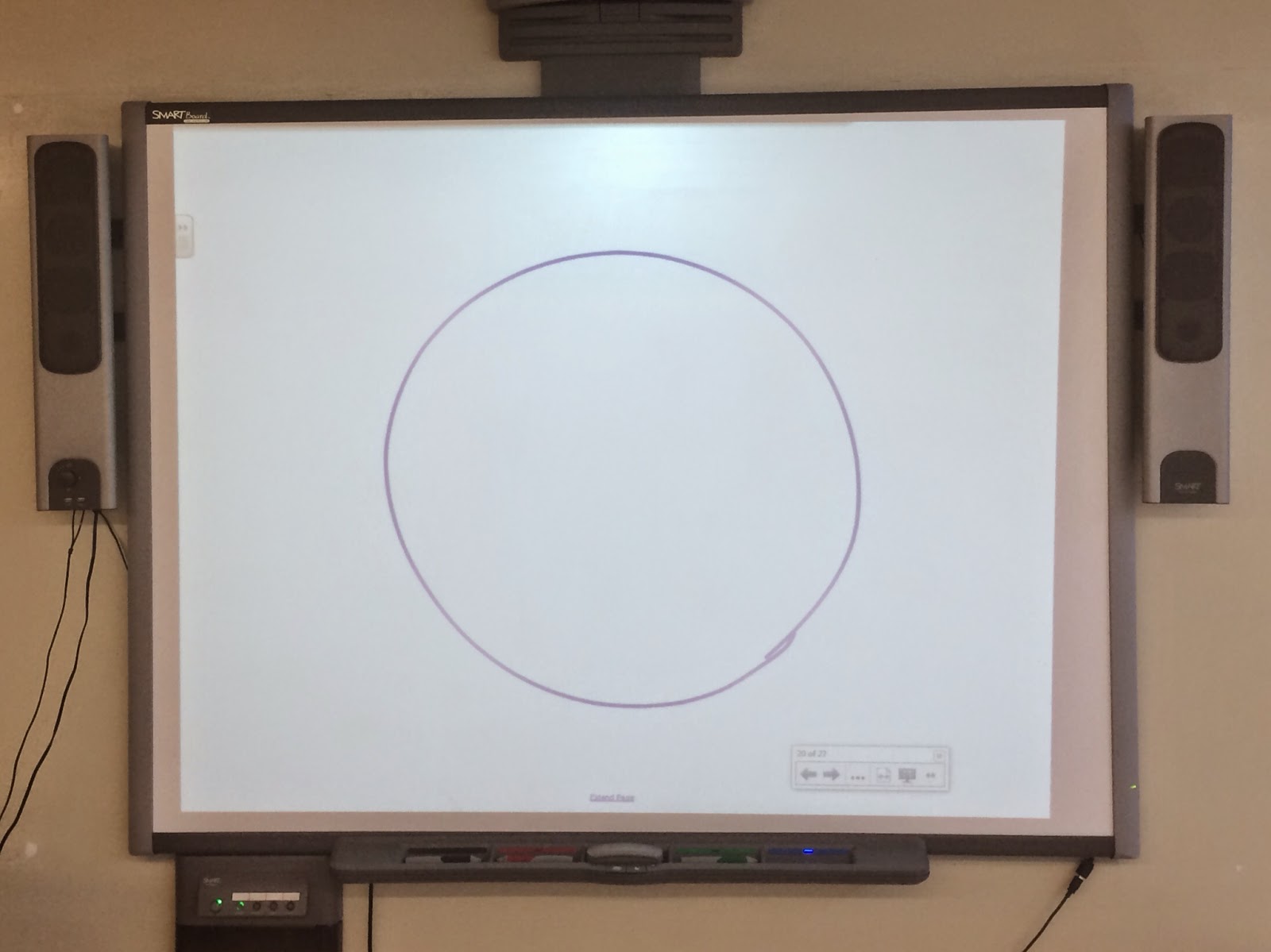 So I started practicing a little bit throughout the rest of the day, and before I left the school, I was able to produce this: 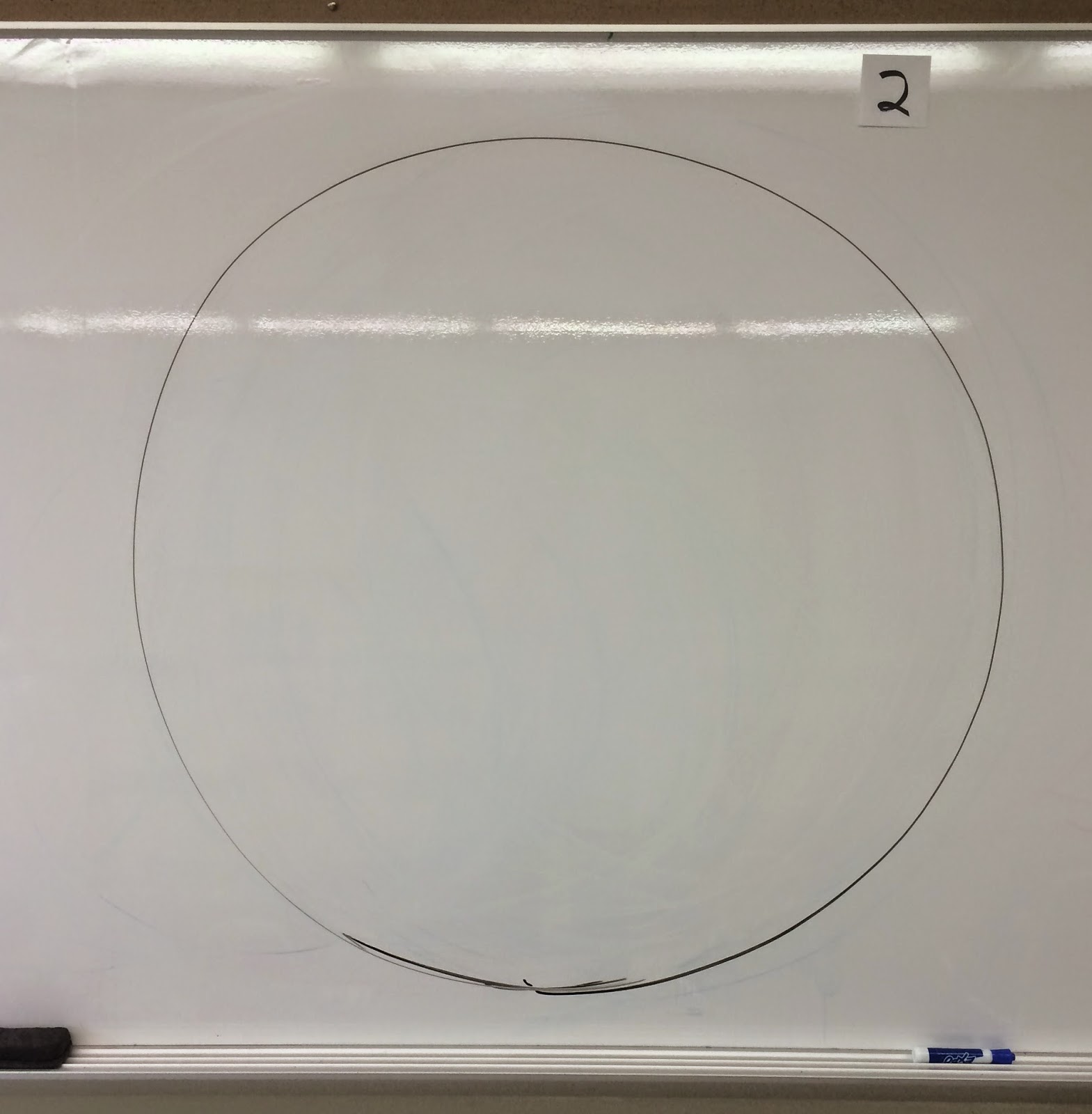 I still have some practicing to do. The upper left parts (of both circles) extend out a little too far. Maybe someday I'll be good enough to challenge Alex.
Posted by Mr Kraft at 6:25 AM