This is my first year teaching sixth grade math, and one topic that students have to understand is how to construct circle graphs. This is a part of the old Pennsylvania math standards which are currently being phased out because of the Common Core. (Note: Circle graphs are not mentioned in the Common Core standards (prove me wrong), though finding angles and percents are.)

These sixth grade students have some familiarity with common percents and how they relate to fractions (50% = 1/2, 25% = 1/4). They have experience measuring angles and can identify straight and right angles. They can convert fractions to decimals. But how all of this relates to circle graphs is a mystery to them.

I'm preparing them to create these circle graphs, and before I explain to them how to do it, I present them with a few simple ones to see if they can guess the percents. Here is the first one: 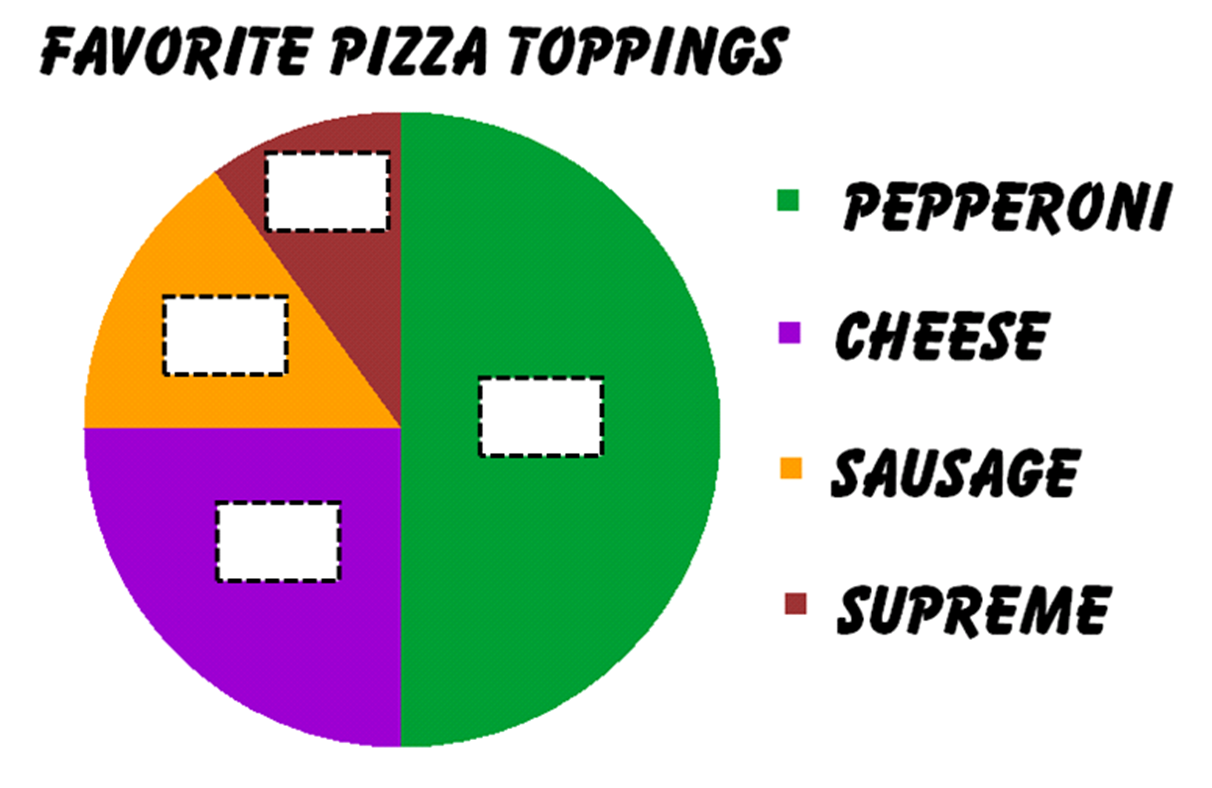 Me: Ok, can someone pick a sector and tell me what percent it represents?

Me: How do you know?

Ray: Because it looks like half of the circle, and half is the same as 50%.

(The majority of the class raises their hands.)

Dana: The purple one is 25% because it is one fourth.

(Again, just about everybody raises their hands.)

Me: Alright, we'll put 25% here. Hmm. I'm guessing these last two are going to be tougher. Can someone tell me something about these last two sectors without telling me the value of either sector?

Me: How do you know that?

Winston: Because the circle represents a whole or 100%, and all of the sectors' percents need to add up to 100%. So if we know the other sectors add up to 75%, we can subtract that from 100% to find the remaining percent.

Me: Great! Does everyone see that? In fact, when you look at red and orange sectors together, they look like they're the same size as the purple sector. So a total of 25% makes perfect sense to me. Can anyone tell me anything else about these two?

Janine: The orange one is bigger than the red one.

Me: Ok, do you have a guess as to what those two percents could be?

Me: How many people agree with Janine?

(Again, a bunch of hands go up, but not as many. Some students are squinting at the board, trying to come up with a better guess.)

Me: It doesn't seem like we're too sure this time. (Peter is eagerly waving his hand in the air.) Yes, Peter?

Peter: I'm pretty sure that Janine is right, because it looks like you could fit two red pieces inside the orange piece.

Me: Can you come up to the board and show us what you mean?

Peter: If I use my hand to measure the orange piece, I can fit two hands along the edge of the red piece.

Me: How many agree with Peter and Janine then?

Me: Ok, then I'm going to write Janine's original answers in. Now, does anyone know a good way to make sure that our numbers make sense?

Me: Great! Ok, I guess we have to check to see if we're actually right.

(One at a time, I remove each white box that is covering each answer, and everyone is relieved to see that our guesses were correct. Ray looks skeptical.)

Me: Well, to be honest, I got this picture off of the internet. And we all know how reliable the internet is. Maybe I shouldn't be so quick to assume that all of the numbers are right. Do you have any ideas about how to check to make sure that it's right?

Ray: We could measure the angle.

Me: Actually, we're in luck. I think there's a protractor tool in Smart Notebook that lets us do that. (I pull up the protractor and quickly measure the angle.) It looks like it's about 55 degrees. It's a little hard to see on here. So, what does that mean?

Me: Yeah, so how do we change the number of degrees into a percent?

Ray: We could turn it into a fraction.

Me: Yeah, but...we know the part is 55 degrees. What's the whole? How many degrees are in the whole circle?

Me: Is that right, class?

(Some kids punch some numbers into their calculators.)

Me: Ahhhh! Stop! Round it off to the nearest hundredths.

Me: And what is that as a percent?

Me: Yeah, maybe. Or maybe I made a mistake when I measured the angle. To be honest, I think guessing these percents and only being off by a degree or two is really good. Let's try some more...


We then go on to try another one on the board (see picture below) and we have some more great discussions/arguments. 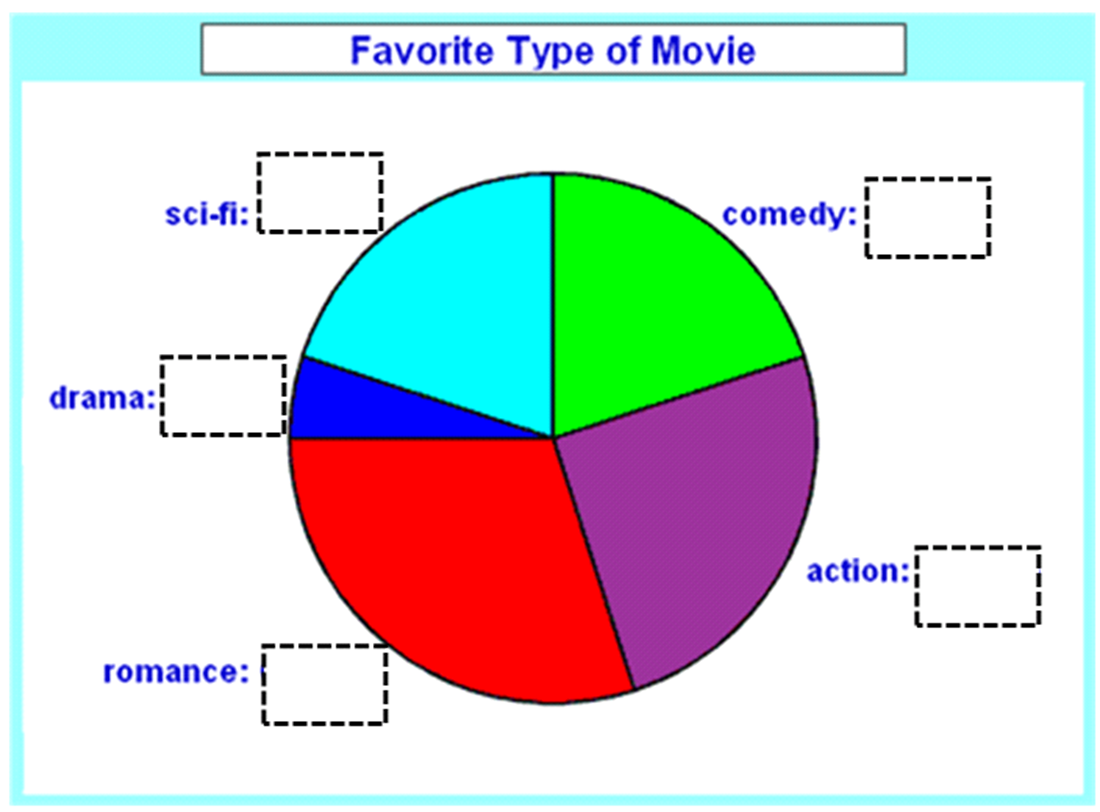 Once the students started to get the hang of it, I gave them two graphs to try (one easy and one hard). They were on paper and I encouraged them to use whatever tools they thought might help them get the answers (rulers, protractors, calculators). 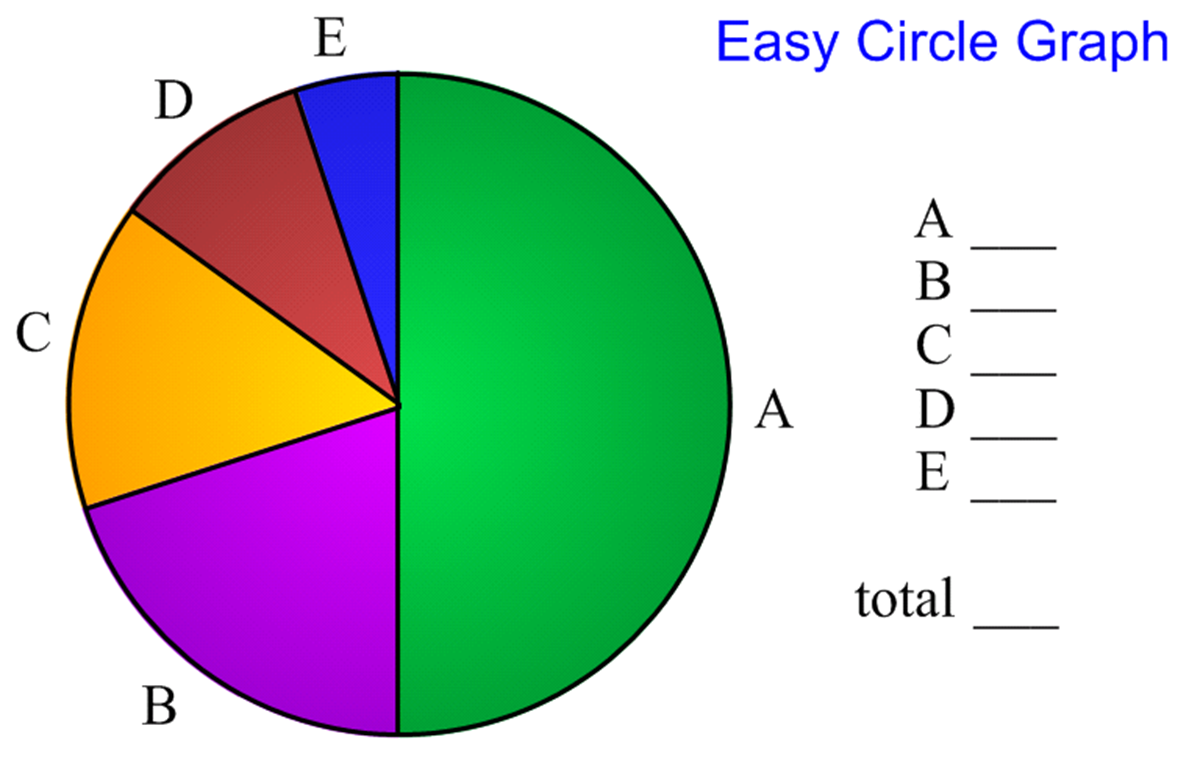 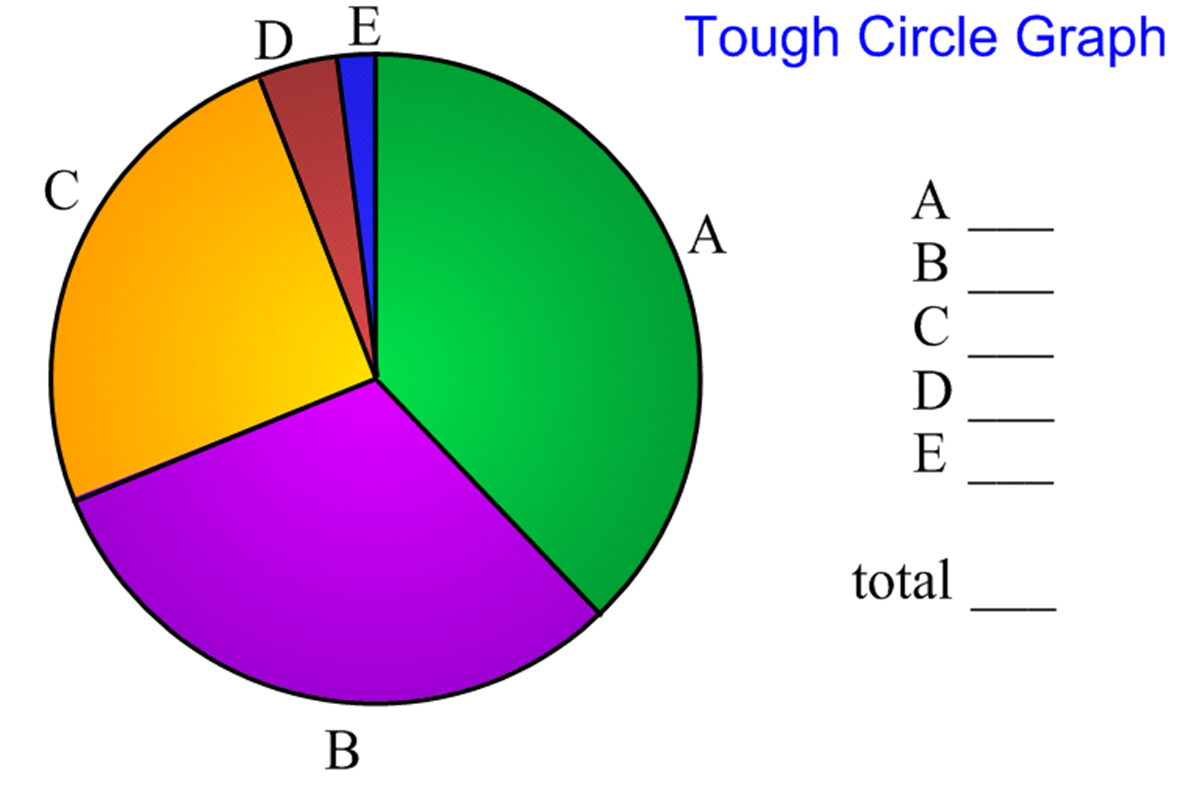 They worked with partners and I walked around to check that each group had the right answers for the easy circle graph. With only a few exceptions, everybody seemed to have a pretty good feel for how the different sectors related to each other and what the percents should be.

The tough circle graph certainly proved to be more of a challenge, and it was great to be able to talk to the students about their reasoning and question them when something didn't make sense. The student below thought that sector C was 10 and sector D was 5, probably in order to make everything add up to 100. I pointed out that this wouldn't work because it means you could fit two D's into one C, or in other words, C is twice as big as D. 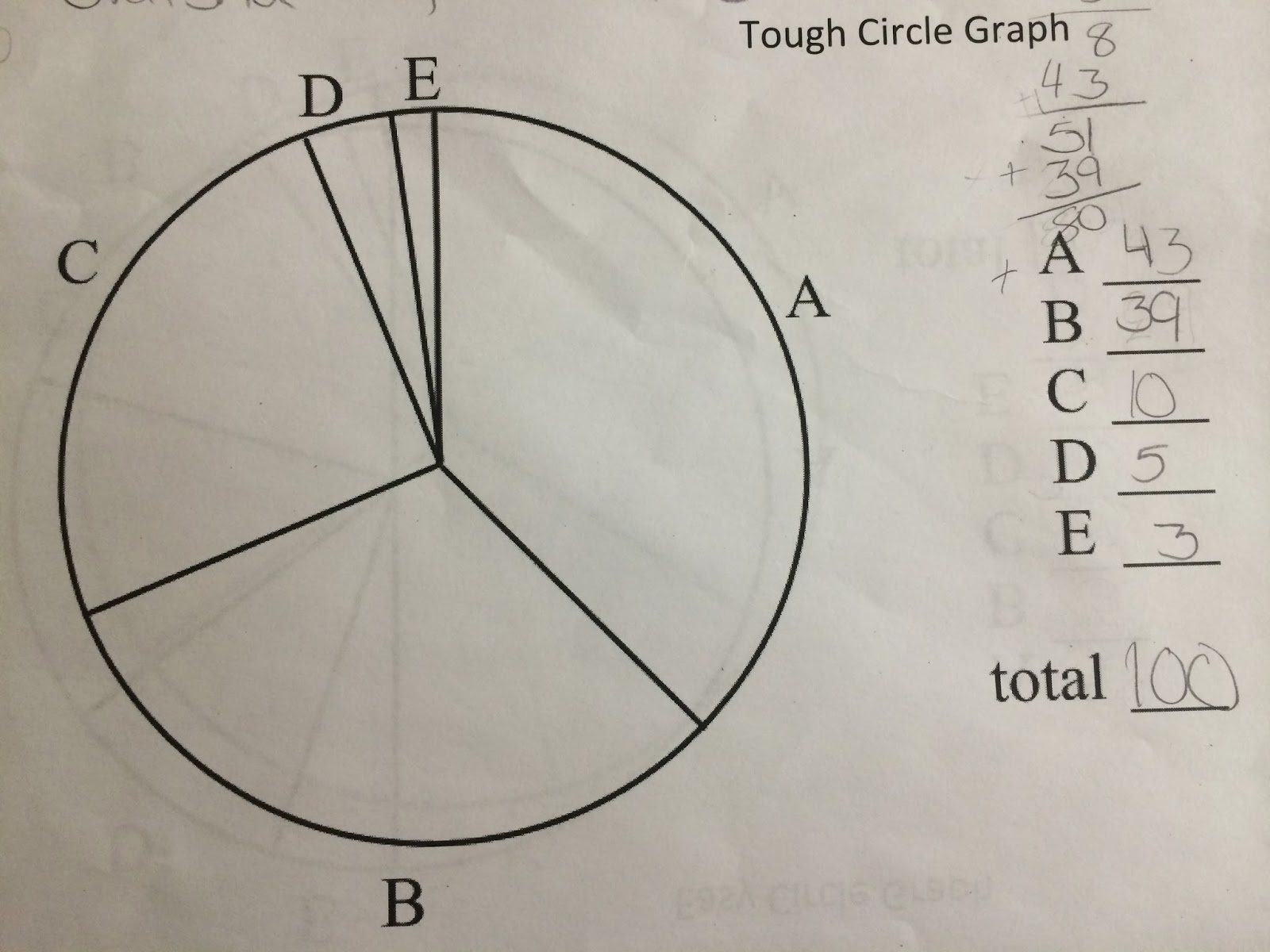 This student used his ruler to cut the graph into quarters and make better guesses about each percent. 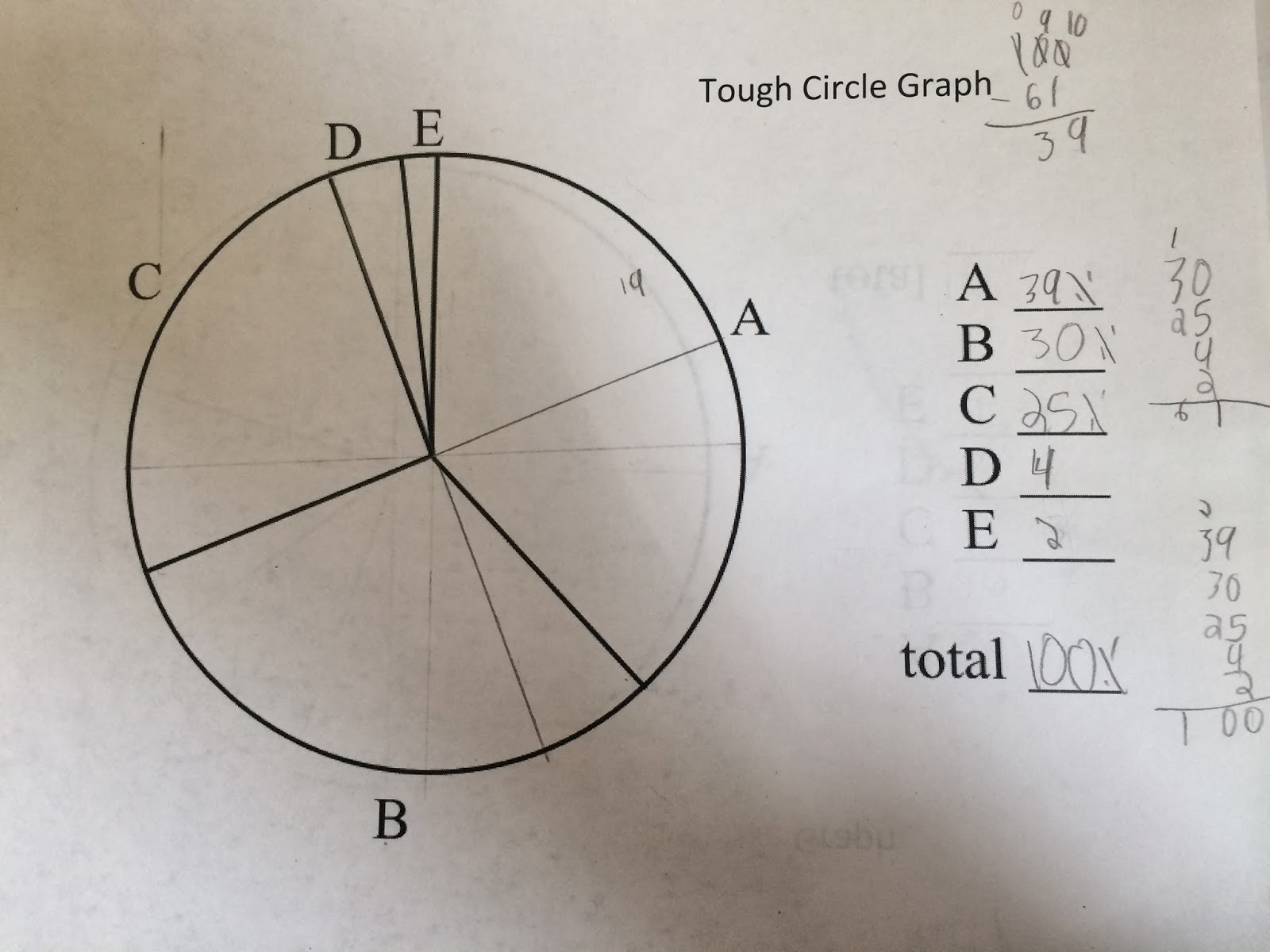 This student assumed that sector B was about 30 degrees, then chopped the entire graph up into 5 degree segments. Though it's not obvious, this student used the protractor to measure the angles and converted them to percents. He had the closest, though not the exact answer. 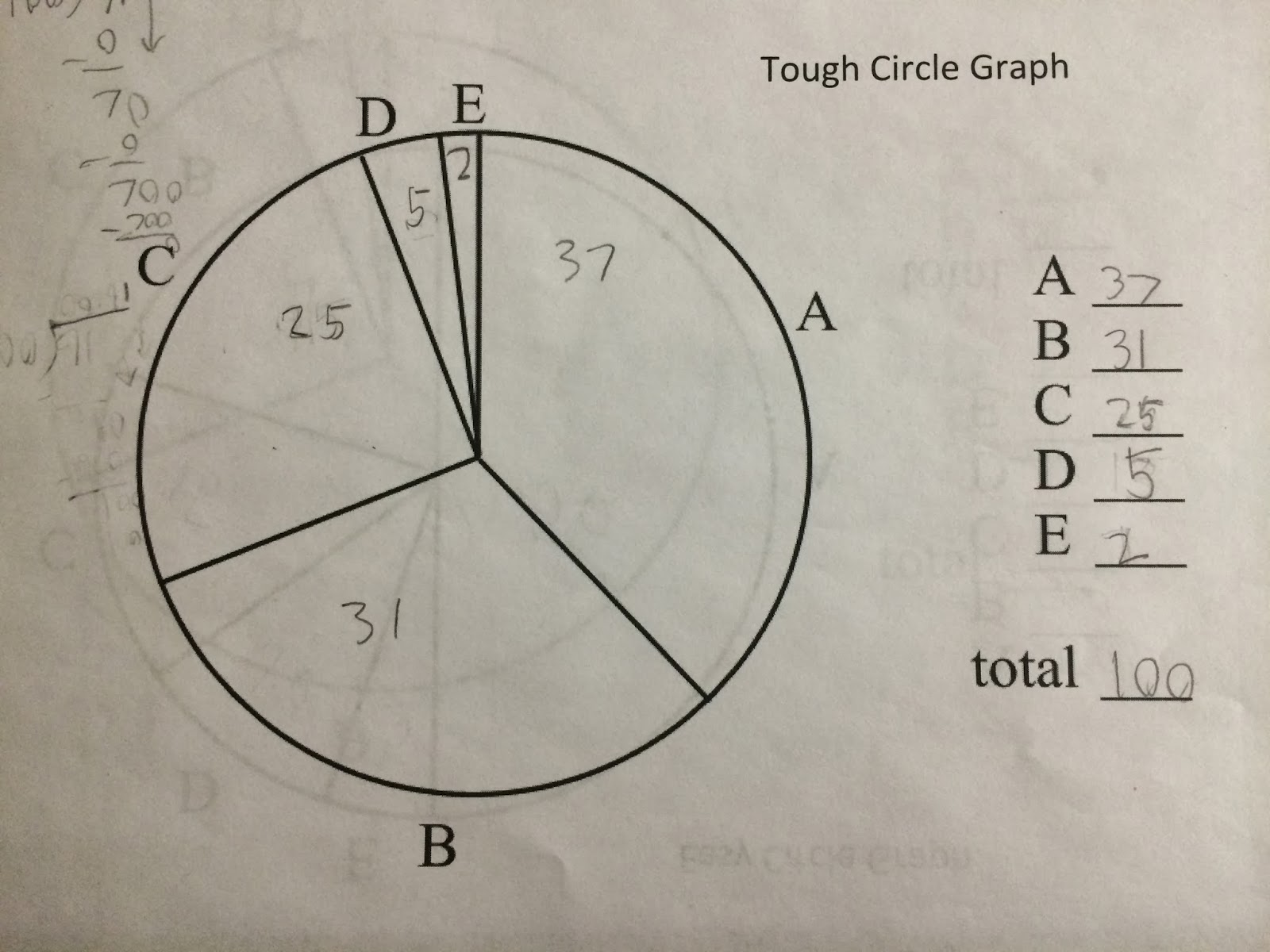 After the students were finished these graphs, I had a spreadsheet ready to go that would calculate the total error in degrees for each graph. Students volunteered their answers and, after all five percents were entered, the spreadsheet showed their error score. It was fun to see the students get excited. After seeing their error and some of the other students' thinking, I allowed them to revise their answers and try again. 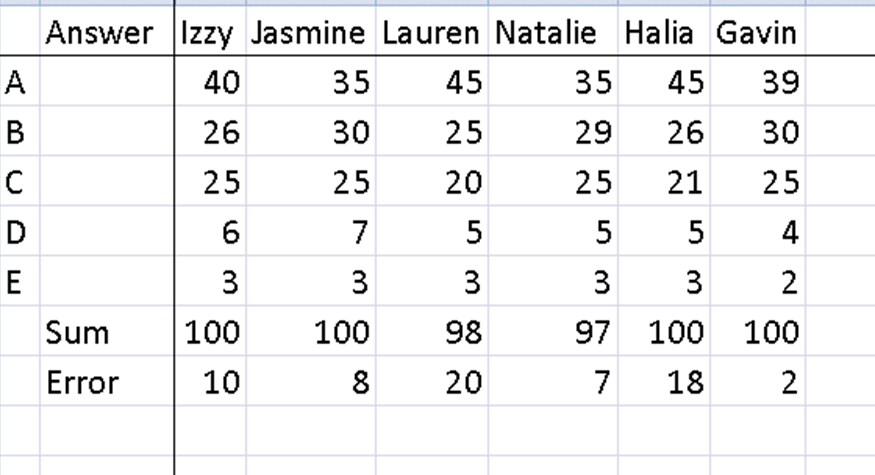 I loved seeing all of the different approaches used and listening to students argue with each other. As a bonus, there were definitely some bragging rights for the kids who got the closest. While many students heavily relied on using other strategies, they now saw the benefit of using a protractor and were eager to know how to convert those fractions into percents.