I really like the following activity and I've blogged about it here. 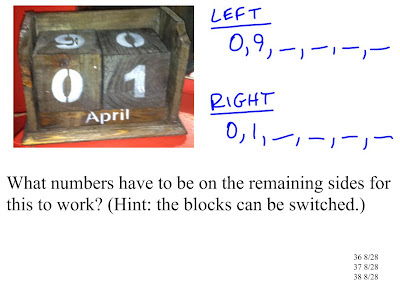 Which is why I got really excited when I saw this Halloween decoration the other day at Michael's: 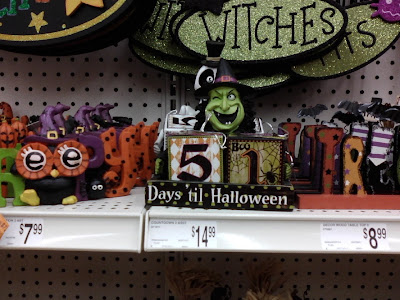 You can display this decoration 51 days before Halloween! Or can you?

What if this decoration can't display each number between 1 and 51? Would that constitute as some sort of false advertising?

TMC13 Recap - (Where I basically just talk about people behind their backs.)

This was supposed to be a recap of cool things I learned at Twitter Math Camp 2013 (TMC13). But then I thought, the hell with you people. You should have been there. It's your fault that you don't know what happened. Why should I fill you in on every little thing? Let this be a lesson to you. Next time, you can get yourself off of that damn couch and attend a conference.

Alright. Maybe your lameness can be blamed on having a horrible childhood. Or maybe you're too poor to make the trip. I guess I can cut you some slack.

I'm not going to give a detailed description of presentations I attended. There are already a lot of people already doing that. To me, the coolest thing about this conference is meeting all of the people I've been following in blogs and on twitter. These people have had an amazing impact on who I am as a teacher. I couldn't pass up the opportunity to meet them, exchange more ideas, and have some fun in the process. So this is basically an homage to those I've met and how awesome they are.

Every year I try to achieve some sort of ideal in my practices. Fawn Nguyen epitomizes what that ideal should be. I don't know anyone who blogs as honestly or as intelligently as she does. She is obviously an amazing teacher and I strive to be just like her...just taller and less Vietnamese. She did a presentation on Conway's Rational Tangles.

John Berray is another great teacher, which I didn't really realize until I attended his session this year at TMC. He is obviously a great performer in the classroom and I have to believe that his students adore him. He does this great activity called Shot at the Glory. Check it out.

John also taught us the best way to open bananas. (This isn't him in the video.) I tried it out this morning and it works like a charm.

I met Max Ray during the EnCoMPASS fellowship and was impressed by his notice/wonder talk. He has such a natural sense of humor and I could just listen to him talk about anything. He's also written a book which will be out very soon. I'm so excited to read it! (He also gave me free passes for me and my son to use at the Elmwood Park Zoo. Nice guy.)

Michael Pershan is probably one of the most reflective teachers I've met. I envy his curiosity and enjoy reading and listening to his thoughts. And the highlight of my trip has to be his performance of "99 Problems" at karaoke. I don't think anyone was expecting that.

Ashli Black impresses me how she is able to immerse herself in this strange mathy world of ours, traveling to anything and everything including PCMI. I attended her presentation on building algebraic thinking. It was a great hands-on activity that can spark a lot of great conversation in the classroom. I also have to give her a shout out for suggesting I read Embedded Formative Assessment. The research on feedback is very surprising.

Lisa Henry did an amazing job on organizing all of this and I can't thank her (and her husband) enough for doing it. I'd also like to thank her husband for not punching me in the face after I sang "Paradise by the Dashboard Light" with his wife. 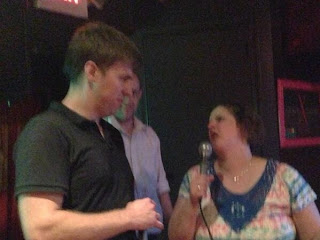 It was cool meeting Nik Doran, because he's British and I've been watching a lot of British TV lately: Doctor Who and Sherlock. He's no Benedict Cumberbatch, so I closed my eyes and pretended he was. (What? No. I'm not in love with Benedict Cumberbatch. I mean, yeah, he's incredibly handsome and quirky. But love? No. I mean, I like him. Let's change the subject. This is making me uncomfortable.) I'm also impressed with how he's trying to bring this weird twitterblogosphere thing to the UK.

Sadie Estrella is full of piss and vinegar, which is a testament to how passionate she is about life and teaching. I also think she could beat me up.

Chris Robinson is a great resource who also lives in Pennsylvania. I'm always impressed with the amount of time he gives to this math community. It was nice to share our aggravations over how stupid Pennsylvania is being over their implementation (or non-implementation) of the Common Core Standards.

Eli Luberoff is the founder of desmos.com and gave a great presentation of his software. I've never seen math teachers get so excited over software features. He's also a really nice guy who is genuinely interested in how people are using desmos and how he can improve it for them.

Jen Silverman threw a cardboard dodecahedron at my face as I was trying to drink my coffee.

Christopher Danielson is a very insightful guy and I love his lessons on food (Oreos and Tootsies) and his conversations with his children. He gave a great presentation on the two of the Five Practices for Orchestrating Productive Mathematics Discussions: anticipation and connecting. We were asked to see how many ways we could cut a tootsie roll into four equal pieces. I came up with the following solution, which I wasn't sure about at first, but it works. It's just weird because the four pieces don't have the same shape. 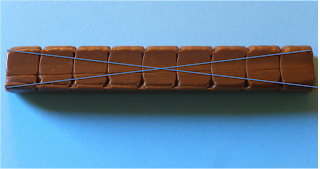 Mark Sanford is starting his first year of teaching. I think it's incredibly awesome that he has tapped into this community before his teaching career has even started. He is so lucky to have so much great direction from the get-go.

The Mathalcious team is basically the Justice League of math education. Karim knows how to find talent (Chris Lusto, Ginny Stuckey, Matt Lane, Kate Nowak), and I am continually impressed by what he and his team have produced. I am also grateful to now have an understanding of the "romance cone" which is a graphical way of representing the dating rule of "half your age plus 7". 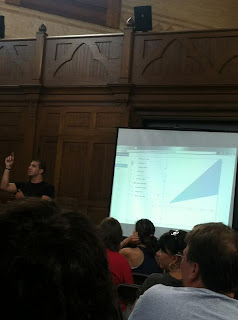 Sean Sweeney, Rachel Kernodle, Julie Reulbach, Kate Nowak, Chris Lusto and Greg (something or other) did a great job ending the conference with a parody of Tik-Tok by Kesha. At the last minute, they asked me to go up on stage with them and dance, but I'm glad I didn't. It was too much fun to watch.

Greg (in the video above) gave a quick talk on how he uses his ukelele to teach students. Apparently, when students are working and he is playing his ukelele, the students think that he is too busy to be bothered, so they look to each other for help. He still walks around the room and monitors their progress, but he is no longer a crutch for the students. Genius.

Julie Reulbach (also in the video above) always has an infectious smile on her face and is perpetually happy. I'm so glad that I got to know her a little better.

Kate Nowak (also in the video above) had a great t-shirt with the following image. Kate also asked me to sing Van Halen's Hot for Teacher at karaoke. How could I refuse? 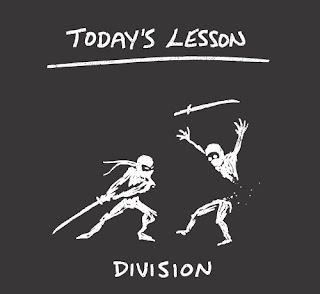 Shauna Hedgepeth gave a great presentation on some of the activities she does with her statistics classes. The coolest part was that I'm able to take any of those ideas and use them in a middle school classroom. She also had us running up stairs to find our horsepower. 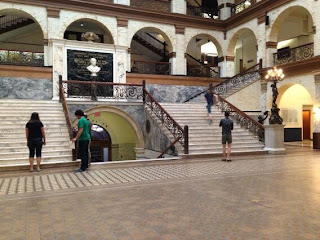 Steve Leinwand has a loud booming voice, which fits him because he seems like the authority on mathematics education. I'm still impressed that he came to the conference which shows just how cool and involved he is.

Sam Shah is a lovable guy and fun to hang out with. I was a little worried that I offended him because I told him that I did not enjoy watching Real Housewives of...Wherever, but I think he's forgiven me. I'm so glad that I got to spend some time with him my last night there. He taught us how to play a really cool word game called Contact. 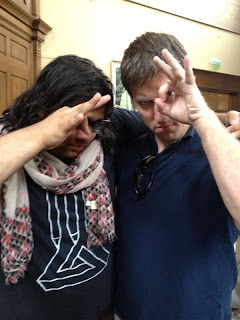 And what did I provide in return for all of their awesomeness? My amazing dance moves!

Sophie Germain! I mean Anne Schwartz! Or whatever her name is! That girl was awesome at karaoke night and she did a great little talk about how people need to shut up and listen to students. (We have a tendency to cut people off and try to fix their problems for them.) She's another person I regret not getting to know better.