I love this clip from Seinfeld where Kramer describes what happens at the dinner table when you're married. It would seem that one of the worst parts of marriage is the time when you talk about your day. Was it a good day or a bad day? Eventually this became the inspiration for how I chose to teach integer operations.

I used to teach adding integers with gang violence. There were two gangs (positives and negatives) who would fight and kill each other. The only problem with this metaphor was that it was only really good for adding integers. It didn't help me teach some of the other operations (subtracting a negative, negative times a negative).

I also had the problem of offering students too many ways to think about adding integers. I used gang violence, money, number lines, drawn positive/negative signs, and the boring rules. But it was way too much information. I was trying to offer my students choice, but many were becoming confused.

So I'd like to say that I have one way to explain integers, and it all has to do with having a good day or a bad day. I start the lesson off by showing this slide: 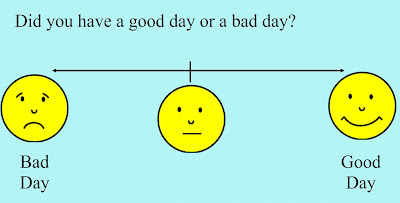 I ask my students how they know if they've had a good day or a bad day. What kind of things could help you move to either side of the spectrum? I then use specific examples, always in pairs (see below). I use little arrows to indicate which way we are moving on the happy face (soon to be number) line.

This third scenario (the lost cell phone) had some debate. Maybe the loss of a cell phone was a good thing...perhaps this would convince your parents to buy a new/better phone. But the point was to show that when a bad thing happens, and then an equally good thing happens, you end up back where you started. It was neither good nor bad.

The kids laughed at this one. Not sure why hamster death is so funny. Perhaps it was the juxtaposition of the two scenarios that made the second seem so ridiculous. But this is exactly what I wanted. Sure, it was nice to find the dollar. But your hamster is dead. Finding the dollar does not make up for the fact that your hamster died, so overall, it was a bad day.

And finally, the lost/found money. This last scenario transitioned into the use of a number line (at which point my students thought, "Oh, so this is a math lesson").

Email ThisBlogThis!Share to TwitterShare to FacebookShare to Pinterest
Labels: algebra

Exploiting My Son for Math

At some point I'm going to have to apologize to my four-year-old son, Emmett. Over the last year I've been using him for all sorts of math lessons - many times under the guise that I'm spending quality time with him. It all started with this video:


I posted this on facebook and lot of people thought it was cute. But many also wanted to know the answer to the question. I used the same video in class and one of my students went home and worked on the problem with her dad. She was so proud when she came in the next day with the right answer.

I quickly learned that I could use his "cuteness" to teach math. He was helping me teach probability:


He was helping me teach problem-solving:


And sometimes he'll even inspire lessons. The other night I was sitting in the kitchen doing some work. Emmett should have been in bed sleeping, but instead he was in the living room stacking cups.

He was so proud of his design and he wanted to make an even bigger pyramid. So we went out the next day and bought a bunch of cups, and hence, a new math lesson was created.

So again, I apologize to Emmett for using him this way. But I think he's having some fun in the process. Besides, how many kids have had the chance to do this?


I only hope his cuteness doesn't run out any time soon.

Nathan Kraft
Posted by Mr Kraft at 8:01 AM