I try to read as many other blogs as I can. Sometimes I'll find a really cool idea and it somehow gets lodged into my brain somewhere, waiting to be used at just the right moment.

One of the posts/podcasts that I read/heard was from Dan Meyer and his lesson on scientific notation (I think I got it here). In it he explains how writing numbers in scientific notation can be related to texting. When texting, we often abbreviate or use acronyms to speed up the process (ttyl = talk to you later). Or maybe we do this because we're lazy. Or maybe we do this because it's the cool thing to do. Or maybe there is an annoying limit on how many characters you can use.

Yesterday I was teaching how to write algebraic expressions and this idea popped back into my head. We were looking at the expression "seven more than a number". This has twenty-four characters, and being the ancient 34-year-old man that I am, would take a while for me to text. (And it doesn't help that I only just got a cell phone a couple of months ago.) I then demonstrated how long it would take for me to text this expression to another teacher. I sent her the text which was a little odd for her since I didn't explain why I was sending it. She was nice enough to send back a response: 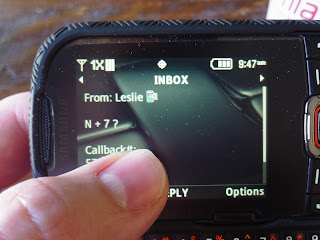 Not bad for an English teacher who curls up into a fetal position every time I talk about math. And look! She used a variable! That saved a lot of time. And only five characters were needed! Awesome! What a convenient way to write that expression! Now kids, here's 200 to do on your own. Good luck.
Posted by Mr Kraft at 6:59 AM