The Oasis of Troy

This past week I spent some time in Philadelphia for the EnCoMPASS Project (more on that later). During the last day, Fawn and I were walking downtown and stopped at this fountain near city hall. 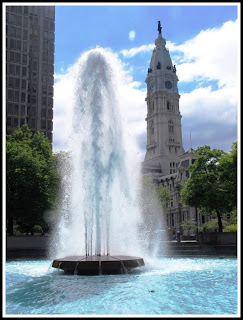 There we met a man named Troy who was selling bottled water. He sat comfortably in the shade of a tree and called out to people as they walked by, "Excuse me, would you like some water?" Although it was a warm day and plenty of people were in the park, it didn't seem to me that he was selling much. This probably had more to do with the fact that people don't like to be bothered by random vendors on the street. I'm one of those people, so I could certainly sympathize with them. Or maybe they just didn't want water.

Eventually a couple walked by, and as per usual, Troy asked if they would like some water. The man said "no". Troy followed up with, "perhaps your lady is thirsty?", and without hesitation, the man again said "no". Troy turned to us and said, "he didn't even ask her!" Fawn and I lost it and Troy joked with us about how the girl was likely to start an argument with her boyfriend for not offering her some water.

In order for Troy to increase sales, I made a suggestion. Troy needed to market his product better. People had to see his corner of the park as a refuge from the hot sun...an oasis. The Oasis of Troy!

As the next customer walked by, Troy, who had not sold any bottles for quite some time said, "Welcome to my oasis! Would you like some water?" And sure enough, the man stopped, seemed to think about it for a second, and said, "Yes."

Later, it came up that Fawn and I are math teachers, and Troy became very excited. Aside from selling water, he also sells credit card processors to businesses. He explained that his main competition in credit card processing is something called The Square. 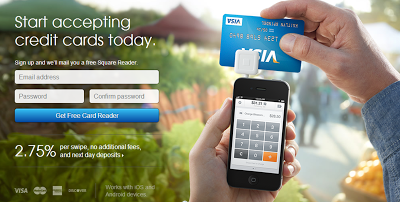 The Square charges 2.75% per credit card swipe with no additional fees. Troy charges 1.09% per swipe with a $10 monthly charge. He explained that he wasn't having much success and that many businesses turned him away, thinking that the monthly fee was too high. But he was convinced that his processor was cheaper. He just didn't know how to express it. There was probably a formula to show this, but he didn't know what it was.

After some discussion with Fawn, we came up with the following formulas:

After setting The Square's charges equal to Troy's, we found that the break-even point was about $600. This seemed to be good news for Troy, because if a business takes in more than $600 in revenue, Troy's processor is cheaper. And sure, he looks worse for a revenue less than $600, but any business that takes in less than $600 per month will certainly go out of business.

I asked Troy, what do I say to students who ask, "when would I ever use this?" He said to tell them, "No, you are never going to use this, but knowing it will allow you to do the things that you want to do." Well said.

For those of you who know Fawn, you know she solves just about every math problem with rectangles. It's uncanny. Here's her solution: 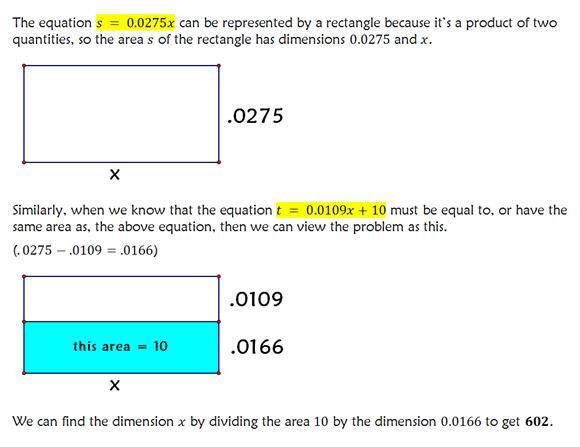 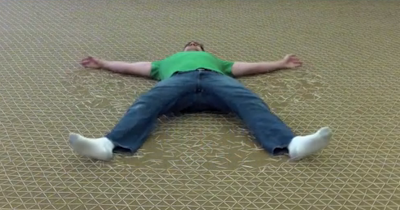 If you've been following my blog, you probably know about my adventures with toothpicks. Basically I placed a bunch of them on my classroom floor for a math problem. I only realized this morning that I never showed the final product on my blog...just on my wikispace. You can find all of that work here:

While I received a little bit of feedback from the twitter crowd, I'd appreciate more. Any ideas on presentation? How would you use this in your classroom? What modifications would you make? Any kind of extension ideas?


Incidentally, a couple of weeks ago I made a change to my Three Act page. It wasn't visually appealing (all text) and I thought I could do better. Click here for the new page. 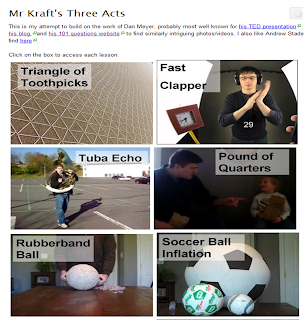