I Shall Never Play a Review Game Again!

Update 8/3/15: I've decided that you probably shouldn't use this game in class and I blogged about that here. I could just delete this post, but I figure there's always the chance that someone will think of a way to improve it.

This is the second part of my ramblings about exponents. You should probably go read the first part before you read this!

I don't think there was ever a moment in my life where I said, "Hey! That review game worked really well today. It really helped to prepare my students for that big test tomorrow. Everyone was fully engaged and asking questions about the problems they didn't understand. They had so much fun and I was really impressed by their good sportsmanship! I can't wait to do it again."

Here's why it never worked for me.... The kids who struggle don't want others to notice, so they make some excuse about how they don't want to play the game. The game is "stupid". So I have to give them a worksheet to do instead. Then somebody notices somebody cheating and demands that points be taken away. Then I have to explain that I didn't catch them, but I will certainly be watching to see if anyone is cheating from now on. Then someone will get caught, and I take points away from that team, and then that team gets mad, and then the other team says something nasty to them, and then they say something nasty back, and then I explain that it's just a game, but that doesn't help, because after a few questions they're arguing again, and then I threaten to give them all boring worksheets to do, and so on and so forth.

I don't know. Maybe I'm doing something wrong, but my kids can't seem to handle competition.

So after one horrible day, I declared, "I shall never play another review game again!" That sounds overly dramatic, but that's how it went down.

So today, after seven months of not allowing any games, I decided to play a game.

It was very spontaneous. Someone asked if we could "do something fun", which annoys me to no end, but after practicing solving systems for the last couple of days, I agreed that something fun was in order. I also ran out of Oreos from a task we did the other day, so bribing them to do work was out of the question.

I remembered reading a post a few months back by Kara Wilkins called Grudgeball. It was some sort of game where everybody gets so many X's and you want to be the last student/group with an X. Kids take turns answering questions, and if the question is right, they toss a basketball into a hoop, and if they make a shot, they can erase one of their opponent's X's. I basically did the same thing, minus the basketball. (I decided to name it "Grudge"...but there has to be a better name for it.)

I wrote everyone's names on the Smartboard and everybody got three X's. It looked something like this: 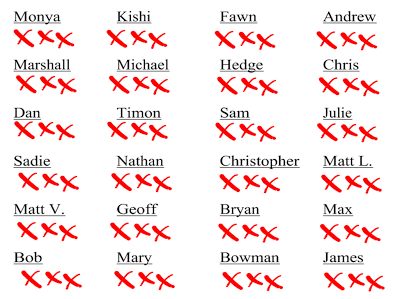 (I know what you're thinking...does he really have kids named Fawn? Hedge? Timon? Bowman??? No. They're completely made up. No one would actually name their kids that.)

I then explained the rules of the game to my students. An expression with exponents would be written on the board. Everyone would write an answer on their little whiteboards, and then anyone with a right answer would erase one X from the board. The last student with an X under their name wins.

This isn't tough. In fact, they just learned how to expand these expressions and rewrite them yesterday. So everybody got it right. Awesome. And everybody got to remove an X. Our board looked like this: 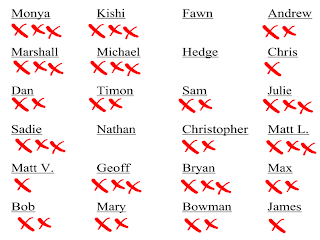 Monya, Kishi and Andrew took Fawn out pretty quickly. Fawn took a little bit of revenge on Andrew, but it didn't do much good.

I gave the students another problem, but this time it was something a little different.

Several of my students point out that they've never seen a problem like this before. With the utmost seriousness, I said, "No. You've never seen this. But you're smart enough to figure it out. Just think about what's going on here." It was just one of those moments where you tell the kids that they're on their own and they need to believe in themselves. Maybe a little corny, but it works.

A little over half of the class got the right answer. We talked about what people did to simplify the expression, and for the most part, everyone was engaged because they wanted to make sure they were good at playing the game. And if that's the carrot that I have to dangle to get my students to think algebraically with 11 days left in the school year, so be it.

Note on game play: Although Fawn, Hedge, and Nathan were out of the game, they could play a zombie role and "attack" other players by erasing their X's. This motivated them to keep playing, even though they could no longer win.

Another problem was given that was similar to the last one. That time just about everybody got it. Then we tried dividing powers. Only two or three students figured it out. Then we did another, then half the class figured it out. You see where I'm going with this?

I kept introducing something new. Some students got it right away. For some, it took a couple tries. But eventually, everybody learned how to do it.

The game was finished when all of the X's were gone except for one. Usually the kid that wins is the one you least expect. 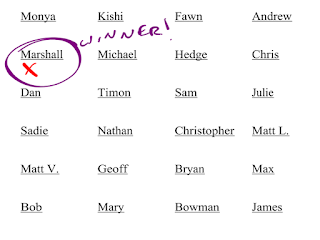 If you remember, I said I'd never play a review game again. And technically, I didn't. This wasn't a review. This was mostly new material. I wasn't using a game to trick my students into practicing something one last time before a test. I was using a game to encourage them to learn something new.

Caution: This game seems to work differently for different groups of kids. If there's a lot of animosity in the room, it's probably not a good idea.
Posted by Mr Kraft at 6:49 AM